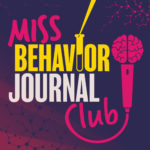 It’s the best neuroscience and comedy podcast of all time! Amielle Moreno and Leah Krevitt are two scientifically trained and certifiably funny females bringing you a behind-the-scenes look at the latest neuroscience research with humor, humility, and humanity.

Unlike stuffy science podcasts, the MBJC is mixing some sucrose into your science diet. Each episode is packed with humor as well as fascinating new discoveries on why we do what we do. Topics range from Autism to Alzheimers, covering neurological disorders as well as research on basic behaviors like eating and sex. Beyond the findings, the hosts are dedicated to providing insight on how research really gets done. They’re also willing to share their scientific view of the world around us as well as some of their embarrassing personal stories.

The world deserves a neuroscience and comedy podcast, and the ladies at the Miss Behavior Journal Club are happy to oblige. Come join the club!

And be sure to mis-behave!

Bayesian buff and actual dang professor Dr. Rachel Branco joins us for puppies, p-values, and prurient PET scans. She bursts some amyloid-beta bubbles with the latest Alzheimer’s news from the FDA. We also dive into the complex relationships between opioid receptors and sex drive, as well as the complex relationships between fitsing and sitsing. All the while, we wonder: what is a cell? (A soup? A gruel? An étouffée? A Pixar blockbuster waiting to happen?) Also: carnival mallets.

Amielle has two good excuses: she had the flu, and she was doing it for science. Why she decided to share has more to do with owning up to the fragility of being human. This episode has it all: Wolves! Whales! Typewriter chatbots! Nitrous! Immediate early genes! Toe tapping! Also, treacherous toots.

With Leah away, Amielle pulls funny man Tom Hage off the street to talk about casual topics such as antidepressants and racism. Was this all a huge mistake? We will non-experts handling such topics cause outcry? Like the american medical journal JAMA we’d prefer to not know how wrong we are.

(After some intense discussion about Israel) the hosts present new research and some neuroscience in the news! There’s neural architectural changes going on during medically induced comas, urine coming out of paws and a big, scary, new prion-like disease has popped up in Canada. And we wrap it all up with one of the best take-aways of all time: Say True Shit! Also, Roll Tide (of cyanobacteria)!

Friend of the show Nicole Davies drops by to guest host and discuss the neural effects of songs, both in the forest and in the fMRI scanner. We get into the differences between wanting and liking, grumpy backseat scientists, and otters. Also: great tits.

This episode is all over the place (cells). We rethink zinc, contemplate the cortex, and burst some menstrual synchrony bubbles. Also, smelliness.

In this episode, we say ‘goodbye’ to a good man, ‘‘hello’ to a new area of neuroscience research and ‘WHAT?!’ to our first guest’s thievery-heavy collider stories. You can watch Dr. Amy Sharma and her merry band of scientists-turned-comedians at Science Jazz Hands! March 23 at 8 PM.

Monkeys, much like wine, get better with age [at stealing flip flops]. In this episode of the MBJC, the hosts re-cap the tastelessness of the previous episode, re-tread Leah’s anti-trans(genic mouse) opinions, and marvel at a strong, independent, neurotransmitter receptor that’s doesn’t need any ligand telling it how to live it’s best life! Also, get over yourself, macramé!