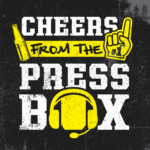 The boys start talking the NBA Finals, then quickly go on a tangent. The recap both Monday Night Football games and the effects of the coronavirus on the NFL season. They go over the MLB Playoff and let you know who won the WNBA Finals.

Joe finally has something to celebrate, even if he knows it was smoke and mirrors. Brennan loses to Joe Burrow and takes his anger out on Kyler. The boys also discuss all the goings on in the NFL weekend. Jimmy Butler had a stellar performance in Game 3 of the Finals, is this a turning point for the Heat and can the Lakers bounce back? And what is happening in College Football? All this and more on another episode of Cheers From The Press Box.

Brennan and Joe recap, extensively, a wild week in football. They also preview the NBA Finals, discuss the Lightning’s Stanley Cup victory, preview the MLB Playoffs, and look ahead to the WNBA Finals. Also we are producer-less and aren’t good at keeping an eye on time. We LOVE to talks sports.

Brennan and Joe recap Heat v. Celtics Game 4 and look ahead to Game 4 of Lakers v. Nuggets. They discuss if Drew Brees is washed and Brennan is pumped for TNF. All this and more and…some technical difficulties.

Brennan and Joe navigate their way through Week 2 of the NFL season. Greg steers the ship. Joe’s beloved Nuggets are down 0-2 and Bryson is a cool name.

In our inaugural episode, Brennan and Joe breakdown the opening of the 2020 NFL season, where we are in the NBA Playoffs, predict who will make it to the World Series, and cover Naomi Osaka’s recent Grand Slam victory.
Joe tells us where he is in his fandom for college athletics and Brennan lets us know why he loves sports.